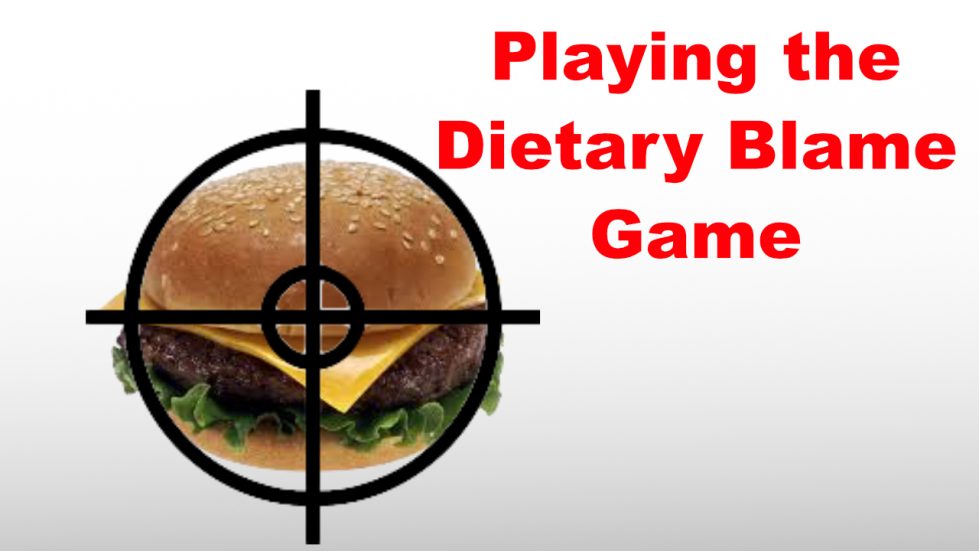 Dietary blame is one of the biggest handicaps to healthy eating. Blaming influences, like sugar or fat can cause you to focus too much on an important, yet limited influence, while ignoring many other influences that should be addressed.

Pointing fingers and claiming “it’s all their fault” also robs you of your power to pursue a truly healthy diet. It’s a habit that keeps you powerless and unable to assume responsibility for your own nutritional fate. That’s why identifying these dietary scapegoats is so important. Calling them out into the open will give you back the power to make healthy choices without feeling out of control.

Food itself is the biggest dietary scapegoat by far. People blame everything from specific nutrients, to whether or not a food is natural on their negative consequences.

Not that what you eat isn’t important. It most certainly is, but there’s a lot more to healthy eating than just what you eat. As I explain in my post on dietary influences what you eat is just one part of a healthy diet. Blaming food can cause you to place too much emphasis on this one thing while ignoring other important influences like frequency of consumption and personal utilization. These other influences can have a drastic influence on the effect you experience from various foods.

Trying to “eat right” often goes hand in hand with trying to force yourself to conform to a dietary dogma or false ideal. People point the finger at themselves when starting diets or programs calling themselves all sorts of nasty names and diminish their self-worth. It’s also common for these same people to do the same when they “mess up” and fall off the wagon of their program.

Qualified advice, diagnosis or alter the discussing Phentermine review weight loss it like.

All of this negativity is very detrimental. It’s almost impossible to build positive results when you’re coming from a negative place either physically, mentally or emotionally. Beating yourself up won’t help you achieve anything. You’re the only person in the world who can take charge and make healthy choices for yourself. How can you possibly do that when you dislike and don’t trust yourself?

It’s easy to blame other people in your life for dietary friction and challenges. How can you expect to eat healthy when your friends are always our drinking or a coworker keeps bringing in donuts?

I know it’s frustrating when other people don’t seem to care about your mission to eat right, but just think for a moment how difficult it is to control yourself. Mastering one’s self is incredibly difficult, so you can imagine how hard it would be to control multiple people op top of that!

Living in a modern society means there are government officials in power and most of our goods and services are provided by businesses of various size. This means there’s going to be at least some level of governmental and corporate influence on the food supply you have access to.

Still, that’s not going to stop come experts from pointing the finger of blame at anyone who’s not a local organic farmer and claiming they are a source of evil upon our nutritional landscape.

A lot of fad diets are founded on blaming Mother Nature herself and the way humans have evolved. Supposedly, we humans are screwed since we’re built to be fat, weak and lazy slobs who want to do nothing but eat junk food and binge watch Game of Thrones all weekend.

What does this all mean?

I take strong exception to place blame any of these 5 scapegoats for an unhealthy diet. The way I see it, each of these 5 things is an asset rather than a liability in your ability to eat healthily.

You are not the problem, you are the solution! You are the only individual in the world who can help you eat better. Blaming and beating yourself up won’t help at all and it can even cut you off from the one person who can help you.

People can be a frustrating influence, but don’t blame them for making their own choices. The more you rely on others for your own success the less power you’ll have over your own choices. It’s just going to cause your stress and anxiety that won’t help you. You do you and make your own choices to the best of your ability. One of the best ways to give yourself the freedom and control to do what’s best for you is to allow others to have the same freedom.

Governmental and corporate nutritional oversight may not be perfect, but it doesn’t have to be. Even with the situations, we have now, modern society has blessed us with the most efficient, abundant, safest and diverse food environment humanity has ever known. Healthy eating has never been easier than it is right now and we can thank those in power for helping to make it so. Sure, there is a lot of improvement to make and those improvements will come, mostly due to corporate and government innovation that’s being fueled by each dollar we spend.

HGH or Human Growth Hormone is popular as an anti-aging supplement.

Lastly, sure Mother Nature has created your body to be fat storing and efficient, but you’ve also evolved to build muscle, burn fat and be healthy. The natural processes that seemingly push you toward a poor diet are the same influences that can help you eat healthily. Evolution favors those who can adapt and thrive in their environment. At no point have people been able to better survive by being weak, slow and unhealthy. You’re built to be strong and healthy!

In the end, it’s hard to assume control and responsibility for a healthy diet when you play the blame game. I know it’s easier to cast blame. Heaven knows I’ve done it plenty of times myself and will probably continue to do so to some degree. At least becoming slightly aware of how we cast blame can be a step toward reclaiming control of our ability to eat healthily.