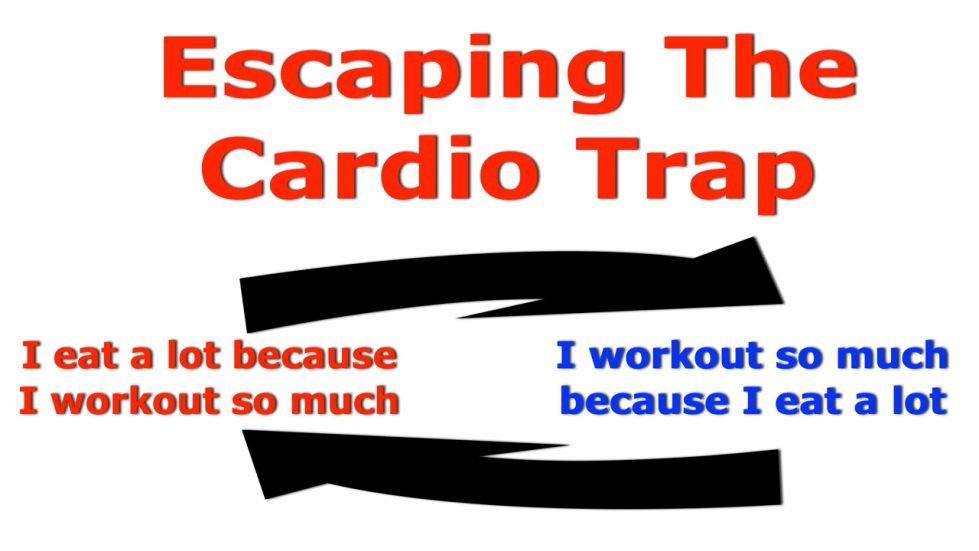 – Feeling anxious after eating and the feeling of needing to work off the food just eaten.
– Thinking of what a meal might “cost” in terms of work load or exercise time to purge it from your system.
– Stress, anger and anxiety when your usual cardio schedule is upset by normal life events.
– Anger at friends and loved ones who express disagreement or concern over the need to exercise so much.
– Feeling like you must exercise even though you may be too busy, sick, tired, or injured.
– A strong sense of self worth related to the exercise. If you exercise you feel light, righteous and pure, but if not depression, anxiety and low self esteem result.

These are just a few of the symptoms and believe me I had them all. Over all though the cardio trap is a catch 22 where you feel you can’t stop working out, but you’re also feeling a constant need to eat and regain energy due to the high frequency of exercise.

Unfortunately there is no quick fix, however the following points greatly helped me break free:

#1 body composition is all about calorie balance

At the heart of liberation is knowing that body composition ultimately comes down to a balance between calorie intake and calorie expenditure.

It doesn’t matter what, or how much you eat, or how long you sit your butt on a spin bike. If your calories consumed equals calories expended you simply cannot gain weight. It’s physically impossible.

You could forever give up cardio and eat chocolate every day, as long as your calorie balance remains you will never gain weight.

That’s not to say that diet and exercise are not important, but all of those things just influence the calorie balance. They do not ultimately control it.

Once I fully undersold the role of calorie balance, I started to take notice about how little evidence there was in the world relating cardio to staying thin.
I had a buddy on the cycling team with a beer gut. Despite our hours in the saddle, he never lost it.
I also had friends who were always thin and yet never did any more cardio other than the occasional Frisbee game.

Once I took a world view I realized that every human on earth gained and lost body fat through out their life. What’s more, these fluctuations were often independent of any cardio activity.

Cardio has physiological feedback that can be calming and addictive.

When I would eat a lot and stress out, I would hop onto the elliptical and right away I would start to feel at peace. I would feel my heart rate climb and my rate of breathing would become labored. As the sweat pooled under me, I would look at my haggard face in the mirror and think “I’m working my ass off, therefor I am burning off fat, calories, or that piece of pie.”

I didn’t know it at the time, but I was partaking in the classic pattern of behavior that sets up addiction.

The problem with the cardio trap is that both the eating and the exercise are relief and stressful. Each one relieves the stress caused by the other. As the cycle is repeated the stress increases as well as the relief making the individual feel out of control.

The point is that the feelings of eating or exercising become mentally and emotionally linked to weight gain, but it’s not possible to actively feel fat being burned or exercised off.

Right now, at this very instant you are burning off calories and fat. You probably don’t think about it much because it happens with hardly any sensation at all. When you workout you’re not making anything happen that’s not already happening every minute of every day. You’re already burning fat, the only thing working out does is speeds up the rate at which you burn it.

However, the very clear and evident sensations of a cardio workout often are interpreted to mean that fat is being burned and the body is becoming leaner.

The same can be said about gaining fat. You simply cannot feel it actually happening. You may feel bigger or more bloated due to various other physical changes, but it’s hardly likely to mean you have grown fatter.

Once I realized that I couldn’t feel my fat actually being burned, I then started to realize that all of the calories I burned counted just as much as when I was working out.

The 7 calories burned while walking to the car where just the same as the 7 calories I burned during that painful minute long sprint on the treadmill. Even though my body felt different, the actual fuel burning going on inside my body was the same.

So while I may not have been huffing and puffing in a pool of sweat, the calories I burned still contributed.

Oh yea, that whole thing about the body burning fat vs sugar at various exercise intensities? Just ignore it. Even though it is true, it doesn’t mean jack squat as far as your entire body composition is concerned. (More on that for another post)

#5 Look to luxury calories as a cardio “short cut”

Once I had finally deduced that body composition was about calorie balance, instead of cardio I realized I could turn to my diet to help manage my weight.

So when I sat down to my next meal I told myself “Matt you can eat a lot of food and then have to go work it off, or you could eat a moderate portion and not have to exercise at all.”

I found it so much easier to not over eat than to over eat and then have to rush off and burn it up.

As far as calories are concerned, pushing the plate away a few minute sooner was exactly the same as over eating and then going for a 2 hour jog. Only now I didn’t have the stress of over eating, and I didn’t have to spend the rest of the evening running in the dark while the rest of my friends went out and had fun dancing. Of course as a bonus those 2 hours of dancing burned off plenty of calories even though it wasn’t actual cardio in the classic sense.

Come to think about it, it was laughing, smiling and goofing around which was a heck of a lot better than paying penitence to the treadmill gods.