The evidence is compelling. It seems that as long as you bring a muscle to a high state of fatigue then it will grow and variables like weight, sets, and reps are only secondary considerations.

I don’t doubt that muscle fatigue is important for muscle growth, but I’m starting to wonder if it’s a misdirected notion. Working out to create fatigue isn’t difficult, but sometimes reaching a state of fatigue isn’t enough. If getting tired and worn out was enough then that should make most anyone who works out much bigger. While I don’t doubt that fatigue is an important part of the process, maybe there’s more to the story.

The muscle fatigue theory states that when you work your muscles to a high level of fatigue you use up a lot of the “biomechanical energy” within the muscle cells. When your muscles recover they pack a little more of that chemical energy in the cell, sort of like stuffing more acid and water into a battery. This is what makes your muscles a little bit bigger and repeating the process many times over is how guys go from scrawny to brawny. 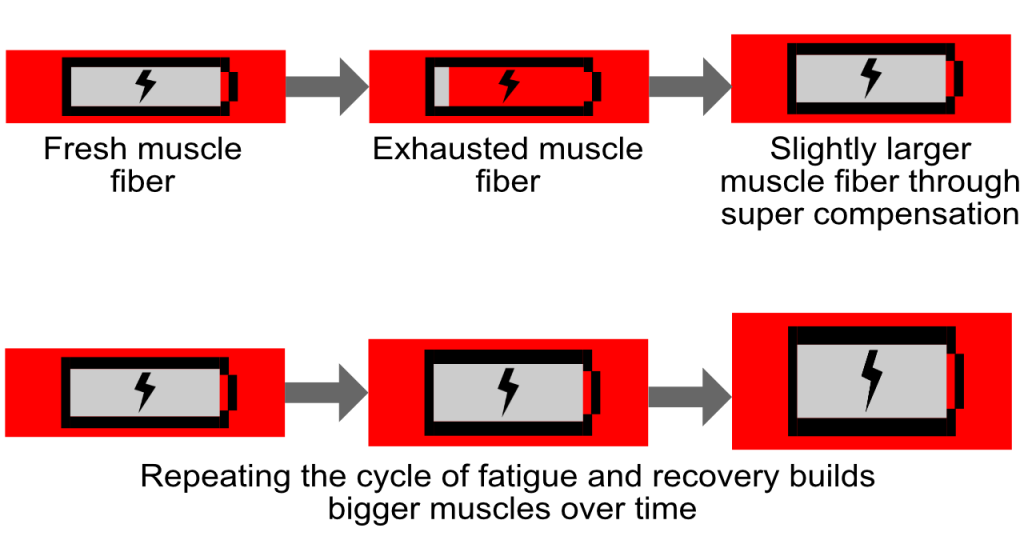 Building muscle is sort of like draining a battery that gets slightly larger each time you recharge it.

So it looks like we get bigger due to fatigue, but there’s more to the story. It’s not so much about making the muscle tired, but placing a progressive energy demand on the muscle that’s important. Your muscles don’t get bigger because you make them tired, they get bigger because you ask them to produce more energy. While doing so does create a lot of fatigue, we must be careful not to mistake the result of the cause of muscle growth for the actual cause.