You Can Build Muscle and Lose Fat at the Same Time 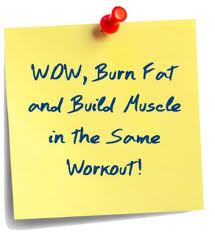 The question before the court is, can  we both lose fat and build muscle at the same time?

Some say it’s impossible, while others claim it is possible as long as you use their highly detailed and complex diet and exercise program (only $19.95!)

The root of contention comes from the idea that fat loss and muscle building are opposing goals.

If you want to lose fat you have to eat less. But if you want to build muscle you’re gonna have to eat enough to feed a small nation.
After all, you can’t add muscle without eating something to make that muscle out of right?

It’s kind of a crappy scenario when ya think about it. If you eat less you lose fat, but you lose muscle. But if you eat more you build muscle but gain fat.

So we can either be fat and strong or lean and scrawny. Ugh!

The good news is that it’s entirely untrue. We most certainly can build muscle without needing to put on fat. In fact, we may even get leaner in the process.

Or as we say in Red Delta language, fat and muscle have different root causes.

Muscle on the other hand is more due to your training. Muscle responds to the demands you place upon it. It’s like Captain Kirk yelling at Scottie for more power and Scotie says “I’m giv’n ‘er all I’ve got Capt’n. I’m gonna have to increase the actin and myosin cross bridges to get more juice out of ‘em!”

Of course exercise can help you burn more calories helping you reduce fat stores and yes if you don’t eat enough that can impede muscle growth. However, I’m willing to bet that if you’re getting 3 square meals a day you won’t have to worry. If you’re not able to eat enough to build muscle you may have bigger problems than not having a V cut.

But hold up, what if you do need more calories and you’re not eating quite enough. Wouldn’t it be great if you’re body had some sort of calorie storage tank that it could access in such a situation? That way you wouldn’t have to worry about eating more. You would just use that extra reserve!

Yea I know, I’m being a goof. Of course I’m talking about fat. If the body needs calories and it’s not getting them, it’s going to use more fat for the difference. That’s the whole point of storing it in the first place. Losing body fat happens because you need more calories than you’re eating so you need to use them from your fat stores.

In this way, we can see the possibility that fat loss and muscle building may not be in opposition of one another. If anything, they might even be allied occurrences!

So far as I can tell, I can’t find a direct correlation between X amount of protein consumed equals Y amount of muscle growth. For the sake of simplicity let’s say you eat 1 gram of protein to put on 1 gram of muscle.

If that’s the case then let’s look at how much we really need to eat. Let’s say you go crazy and put on 40 pounds of muscle in a year. (I wish!) I’m not talking water or glycogen but pure hard core muscle.

At that rate, you’re only looking at about 50 extra grams of protein a day.

40 pounds in a year is a lot. Let’s say more like 20. Now we’re down to about 25 grams you’ll need to eat. That’s how much I put on when I first started training. And no I wasn’t eating anything extra.

How about something more realistic.

In the past 6 months, I’ve put on roughly 5 more pounds with most of it probably muscle. If I really needed extra protein to do that I would have had to eat about 11-12 grams a day. Hardly something requiring me to pound a “Mega Mass” protein shake every 4 hours.

So in the end, yes diet matters when it comes to muscle, but it’s a good chance that exercise matters more. The reverse can be applied to fat loss.

Above all keep in mind that muscle gain doesn’t have to mean fat gain. If you’re putting on fat it means you’re eating too much pure and simple.

How To Improve Your Health In 2022

4 Ways to Push Yourself to Commit to Frequent Workouts