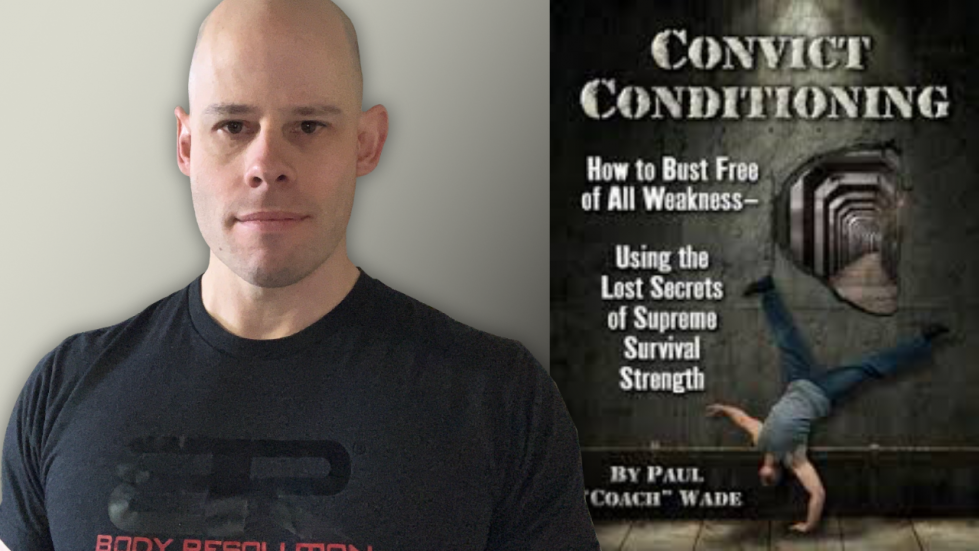 Convict Conditioning was first published a little over 10 years ago. Since then, it’s played a very influential role in making progressive calisthenics a popular and legitimate training discipline.

For the years, I’ve received many questions regarding Paul Wade’s work so I wanted to take the opportunity to answer them as best I could here.

Well, somebody is writing the books and articles out there! It may be a pseudonym or it could be someone we know, but after reading everything that I can get my hands on by Paul Wade, I’m pretty sure there are an individual voice and attitude behind each sentence.

#2 Is Convict Conditioning really what convicts use in prison?

Some people have criticized Convict Conditioning has been illegitimate because it’s not what they have personally witnessed in the correctional system.

But this makes sense, as Paul wades methods are his own personal recipe for progressive bodyweight training. You’re not gonna find the same cookie recipe in every bakery in the country just as you won’t find the same training approach in most gyms or institutions.

#3 Do I really have started at the first step?

Paul Wade’s recommendation that everyone should start on the first step of an exercise seems a little too easy, especially for experienced lifters. However, keep in mind that Paul Wade doesn’t know who you are or where your fitness levels are. It makes sense to recommend starting at a low level and work your way up.

Also, consider that he wrote Convict Conditioning under the assumption that many people would be new to the world of bodyweight training even if they had been training with weights.

Like with any new training method, bodyweight training has its own unique challenges and requirements so it makes sense to start on a low setting to ensure everything is ready to go before rushing forward to more advanced steps.

But just because Paul Wade recommends starting on the first step doesn’t mean you have to stay there indefinitely. If you try the first step and easily meet the progression standard then by all means try the next step and then the next until you find your suitable level of resistance.

#4 Is working a muscle once a week enough?

Yes. Working a muscle group once a week is sufficient especially for beginners and people who are new to body weight training. Once again, Paul weight doesn’t know how fast your recovery is or if you were working around any sort of injuries so it still makes sense to start off easy and then work your way up.

Keep in mind, that working a muscle once a week is only one approach that Paul Wade recommends. There are workouts included in the book that work a muscle twice per week.

Paul Wade wrote Convict Conditioning under the assumption that you would be pushing yourself pretty darn hard in your working sets.

If you approach a couple of hard work sets with a lot of intensity and focus two sets should be sufficient.

However, you know your body best so if you feel you work better with a little more volume, by all means, add it in.

#6 Is the Master step really possible?

I know that the 10th step can seem almost impossible for some people but it is physically possible within the realm of human capabilities. Thanks to the Internet, you can probably find videos and pictures of people doing one arm handstands and loads of pistol squats as proof.

#7 How long should it take to reach the Master step?

While the master step is certainly within the realm of possibility some people look at it as if it’s something they should accomplish relatively quickly. However, just like other elite levels of physical performance, some people will have to work for years to accomplish such goals while others may be able to accomplish them in a fraction of the time. Some people may not even get there at all. But don’t let that discourage you as making progress from where you are now is the key to feeling and living better.

# 8 Do I really need to stick to just one step?

No. Sticking to just one calisthenics technique is like a weightlifter only using one weight in the gym. It’s natural, and smart to use a variety of weights even for the same exercise for different programming variables and circumstances.

Bodyweight training is just like weightlifting only instead of adjusting the weight you lift you adjust your technique. So using just one technique is akin to lifting just one weight which doesn’t make a lot of sense in the long run.

So feel free to “lift lighter” for the sake of warming up, drop sets, improving a technique or any other reason you would lift a lighter weight. At the same time, use a more advanced technique just as you would use a heavier weight in the gym.

#9 Is there progress after the Master step?

The 10 steps for each exercise in Convict Conditioning are more like signposts than actual steps. They are mile markers you can use on your progressive journey. This includes the mile marker for the coveted 10th step. Like all skillful journeys, there is no true end to what you can accomplish with progressive calisthenics. There is always a more difficult variation or wait to do every exercise.

#10 When should I progress to the next step?

Feel free to try out the next exercise whenever you feel ready or when you have reached the progression standard. With that said, beware of the tendency to rush forward in your steps. Instead of asking yourself when you can advance to the next step, ask yourself how long you can remain at a given step and still continue to gain a benefit.

#11 Can you really build muscle with calisthenics?

In the grand scheme of things the actual exercise tools and methods you use or a rather trivial influence. All a legitimate method needs to do is be able to progressively work your muscles over time. As long as it gives you some method of progressive resistance that is the only requirement you need from that approach.

Beyond being able to create progressive tension in the muscle, other factors such as lifestyle, genetics, sleep, diet, attitude, discipline and a whole host of other personal characteristics add up to form the bulk of your muscle building potential.