The great fat torching tool at work in the early days

When I flip through photo albums of my past, I notice a drastic difference in my appearance during my freshman and sophomore years in college.

I was always lean, but during that time I got super lean. It’s almost as if fat itself was being repelled from my body.

Before with a body fat around 15% 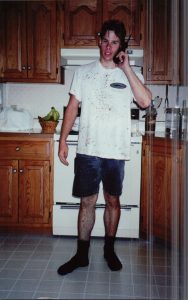 My secret weapon? It was none other than my simple bicycle.

I really do believe that the simple bicycle is one of the greatest fat burning tools we can use.

Some points on why riding is so effective:

When it comes to riding for fitness, there are little to no advantages from a $4,000 bike to a $40 bike. The most you can ask from your bike is that it be safe, reliable and comfortable. Beyond that, all of the other stuff doesn’t matter when it comes to getting you in shape.

So you don’t have to buy an expensive bike to get started. You may not even need to buy one at all. If you’ve already got a bike but it’s been collecting dust then it’s time to break that sucker out!

Plus it won’t cost you anything to go for a ride. it’s not like skiing or golf where you have to pay to play. Just saddle up and ride. If you’re riding instead of driving then you’re saving on gas, so you’re almost getting paid to exercise at that point.

The frame of the bike supports your weight and the pedaling motion is low impact. This is the key to helping you work longer and harder to maximize calorie burn.

Come on! Who didn’t like riding their bike as a kid? The more fun you have the more you’ll do an activity and riding a bike can be one of the most fun ways to get exercise.

It’s wind in your hair (freedom), sun on your skin (vitamin D) and bugs in your teeth (protein). What’s not to love?

Having an active commute is without a doubt one of the biggest calorie burners you can tackle. Yes even more than working out!
Just think, if you are a 30 minute ride to and from work then that’s an hour of exercise you’re getting each day.
If the average gym goer gets 45 minutes of cardio 3X a week then riding to work monday through Friday will yield more exercise in a week than the gym goer will do in a month.

I love going on long rides with friends. It’s like taking a nice long road trip together, but the beer at the end of the day tastes so much better after covering 80 miles on a bike.

It’s so easy to race on a bike. You can race the clock, your buddy or even join a racing club.
Sometimes I’ll even race mother nature. If i hear a storm is blowing in I’ll try and ride a set distance before it hits. If I get wet I lose, but if I make it home dry then I win.

The bottom line is that the bike is one of the most efficient and effective forms of calorie blasting activity you can tackle. With the weather turning nice it’s time to get that bike tuned up and head to the bike path.

The weather is nice and it’s time to get some fun in the sun!

Finally! What Fitness Independence is and is Not Lat Pull Downs vs Pull Ups

Why We Focus on The Wrong Things

Pain; How to Prevent it From Holding You Back