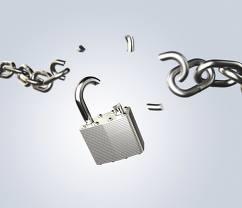 When I started focusing on calisthenics and suspension training I felt as if I had unlocked a crap-ton of potential.

Over time, I came to realize that a big reason for unlocking my own potential was because I was unlocking the movement possibilities in my workouts.

The beauty of calisthenics is that you have the freedom to place your body into any position you like and make minute adjustments during each exercise. This allows you to custom fit every exercise you do.

With weight machines you have far less freedom. Since your path of motion is often locked so is you’re freedom of movement.

Free-weights are often seen as being….well, free to let you move as you like. But hold the phone for just a second.

Sitting or laying on a bench locks your body in a certain position thus only allowing a small part of your body to move as it wishes.

And then we have barbells. Once you place your hands in a position they are locked in place. You can’t move them closer or further apart nor can you twist them.

Even with dumbbells there is a bit of lock down. The resistance of the movement is always in the same direction, strait down from the dumbbell. Anatomically speaking that means your resistance is trait down from your hands.

The ultimate freedom comes from suspension training. The straps allow us to place resistance in any part of the body we wish as well as allow us to place every joint in our body in the exact position we desire. Hardly any angle or motion is locked in place.

Also with suspicion straps, we don’t just have resistance pulling us strait down. The straps naturally resist moving away from perpendicular to the ground. This allows you to have resistance horizontally as well as vertically.

Are locked out position bad? Na, I don’ t have issues with people doing bench press on a machine that locks everything but their eyeballs into place. However I fully believe that the less you lock any part of your body into a position, the more potential you have towards unlocking your full potential.

I’m Messing with Fitness Tradition What is More Important in Diet, Quality of Quantity?

How I Finally Achieved a Workout / Life Balance

Seven Ways To Avoid Back Pain

The Wonderful Truth About Training Plateaus