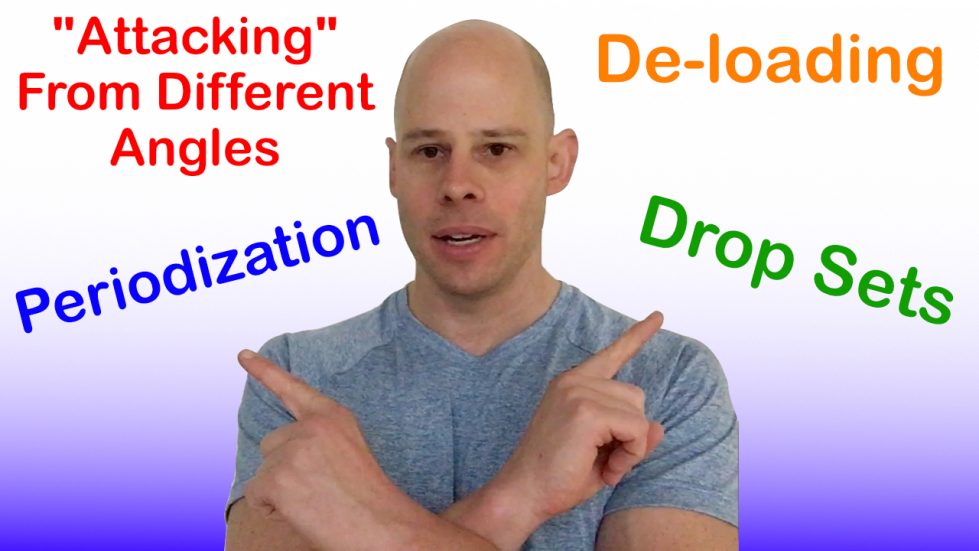 Weight lifting and calisthenics are not as different as some people may think. They both use progressive resistance to make your muscles bigger and stronger. The biggest difference between the two is in how you progress the resistance. With weight lifting, you maintain a fairly consistent technique while adjusting the weight you lift. Calisthenics does the opposite where you adjust your technique while maintaining a consistent weight. 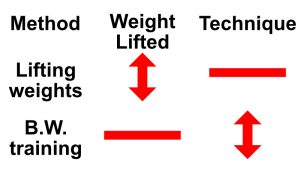 The major difference between lifting weights and calisthenics is in how you adjust the difficulty of the exercise.

The question is, do the differences stop there? Are there other similarities and differences in practical application? Let’s examine 4 common weight lifting methodologies and see how they relate to calisthenics.

De-loading is the practice of cutting back on weight and/ or volume for a week or two so you can give yourself a bit of a break from hoisting the heavy iron. Benefits can include better joint health, CNS recovery and just feeling refreshed mentally.

Calisthenics doesn’t stress the body and mind as much as lifting heavy loads (which is one of the biggest reasons why I practice it) but it certainly is not stress-free. It’s for this reason that some athletes may benefit from having a light de-load week here and there. However, some people just find such things can interrupt the flow of their training.

Use de-load weeks if you feel your mind or body can benefit from a bit of a break from heavy volume or intensities in your training. This can be especially helpful if your workouts are feeling stale and you’re losing motivation to push yourself. If you’re feeling strong and full of vigor then don’t feel like you have to use it.

Periodization is simply arranging your training into “blocks” of time where you emphasize one goal such as strength, endurance, or skill work. The idea is that doing this can potentially help you focus on, and improve, a particular objective more than if you just practiced a middle-ground routine all the time.

Calisthenics athletes can use this same approach with a lot of success either for sport, building muscle or even weight loss. Many calisthenics athletes find they can make greater strides by focusing on a particular type of training, like handstands or ring work, to progress their ability to do those exercises much faster.

I believe most intermediate to advanced fitness enthusiasts can benefit from some sort of periodization. It helps you focus on specific areas you need to work on while also covering multiple bases over time. With that said, I don’t believe it’s all that helpful, or necessary, for those who are starting out. The first year or two of your training should focus on building consistent habits and feeling comfortable with the exercises. After that, you can start to use training blocks to continue making progress.

You can perform drop sets by simply adjusting your technique to make the exercise easier as your muscle fatigue during a set. The same idea works in bodyweight training where training to a higher state of fatigue may help you build more muscle.

Drop sets are great for creating more fatigue in the muscle. Whether more fatigue produces more muscle growth is still a bit up for debate. Much of the research I’ve read (like through this site here) suggests a link between muscle fatigue and muscle growth. However, I don’t know at this time if more fatigue helps or if there’s a cut-off point where you’re just beating yourself up.

Also, note that the more fatigued you become the more recovery you will need. Using a lot of high-fatigue methods like drop sets may not be the best if you need to physically work hard within 24-48 hours.

#4 “Attacking” a muscle from various angles

Bodybuilding is a sport of aesthetics. Athletes are judged on more than just size. Shape, symmetry, and proportion are also important assets while presenting on stage. It’s for this reason bodybuilding has developed techniques and equipment that’s intended to focus on developing different areas of a muscle group in an effort to shore up weak links in one’s physique.

As I explain in my book, Smart Bodyweight Training, Calisthenics is a fantastic method for developing your physique. However, it doesn’t usually involved, or require, such a fragmented approach to physical development. Basic movements, like squats and push-ups, are meant to use the muscles in a more holistic way compared to leg extensions and incline chest flys. It’s because of this that calisthenics usually, doesn’t use methods that emphasize acute details in the physique. This doesn’t mean basic movements don’t address those areas, it’s just they are not focused on as much.

Clenbuterol (Clen) is used sporadically in horse racing so they can breathe easier.

“Attacking” a muscle from different angles isn’t as important to calisthenics athletes as it would be for the competitive bodybuilder. It may not even be necessary considering progressive calisthenics will use a variety of exercises for each muscle group anyway. I wouldn’t worry about emphasizing as specific areas of a muscle group. Instead, focus on including those areas with your basic movements as per my Chain Training Theory which you can download here. I also cover it in more detail in my book.

As always, most considerations may not matter all that much unless they matter to you with your given set of goals, resources of circumstances.