Where Fat & Calories Really Come From

Understanding how to lose weight starts with clearly understanding the origin of the fat and calories on your body.

I used to believe that there were different types of calories and that a lean diet came from the right balance from various calories. I also believed some calories were more fattening than other calories. Of course the entire reason why I believed these things was because I had no idea what a calorie actually was.

I always knew that a calorie was a unit of energy, but then I would have also said that fat calories were different than protein calories. This was a huge jump of scientific logic on my part.

A calorie is a measurement of energy but protein, fat and carbohydrates are all types of nutrients. Not energy. The macro-nutrients of fat, protein and carbohydrates contain calories in the same way a battery contains electricity. This is why the argument that certain calories are different than others is not entirely correct.

Understanding calories is easier when we look at their origin. Like all energy on this planet, the calories in your food and body originate from the sun. That solar energy is taken up by plants through photosynthesis. This is the process where the plant stores the energy of the sun between a carbon atom(from Co2) and a hydrogen atom (from water). The “waste product” of this little process is oxygen. 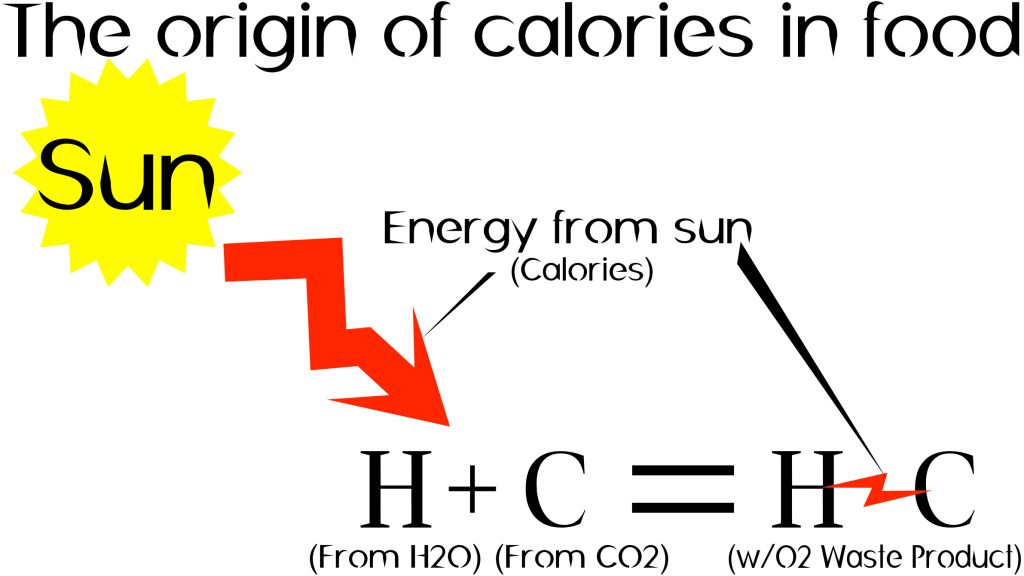 That hydrogen bonded to carbon is the basic building block of your protein, fat and carbohydrates.

Once you’ve used that energy you rejoin the hydrogen and carbon atoms to a couple of oxygen atoms and expel them as water and carbon dioxide in your breath, sweat, and urine. This is why you increase your rate of breathing when you become more active. You’re using more energy, thus you’re body is filling up with more hydrogen and carbon atoms as if they were spent batteries. By increasing your heart rate and breathing you bring more oxygen into your system which means you can clear out more of those H and C atoms. Now the world has more water and CO2 which are then taken up by plants through photosynthesis and the whole cycle begins again.

The big lessons are that calories are energy, but they are not food in and of themselves. Food is like the battery that contains the energy. The other lesson is that all calories are the same and fat gain/loss really is about calorie balance.

Another lesson is that different sources of calories do still matter because what you eat is an influence to your total calorie balance. However, the fact that a big bucket of ice cream may be detrimental to your weight loss, but a salad might not does not mean that the bucket theory of calorie balance is any less credible.

That being said, it is key in understanding that all calories really are equal despite coming from different sources. The sources might have an influence on your calorie balance (usually not a really big influence anyway) but the total number of calories you burn and consume will ultimately determine your body weight no matter what your diet looks like.

Eat To Satisfy; A Guide to Truly Healthy Eating